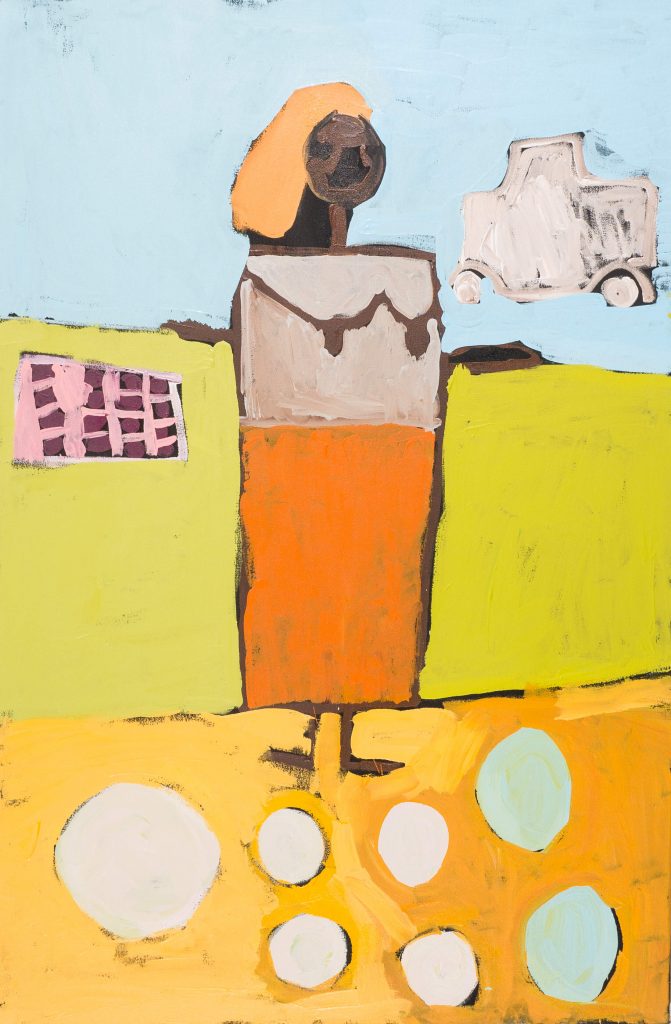 Artist Statement
Profoundly deaf since birth, Doreen started painting with her mother, Mayiwalku Chapman in 2007. This portrait shows Mayiwalku at Wilarra—a distinctive group of small saltwater pools on the edge of a large salt lake, Nyayartakujarra (Lake Dora), near Punmu community. In this portrait, Mayiwalku is standing on a large collaborative painting, completed with her Pujiman sister, Mulyatingki Marney, and is telling the jukurrpa (dreamtime story) of Wilarra to her families.

About the Subject
Mayiwalku Chapman is a Martu artist from the Pilbara region of Western Australia. She was born in the desert at Ngarurr soak in the 1940s and is one of the last surviving Pujiman (nomadic desert dwellers). From birth until her young adulthood, Mayiwalku travelled through her parents’ Country with their family. Following an extreme and prolonged drought, Mayiwalku’s family walked into Balfour Downs Station where they were taken to Jigalong Mission. Mayiwalku lived and worked for many years at Jigalong Mission, eventually moving with her five children to Karntimara (Warralong) where she lives today with her children and grandchildren.

Further Insight
Doreen Chapman was born in Jigalong in 1971 and has spent her life moving between Western Desert communities in the Pilbara, Western Australia. She is a Manyjilyjarra artist and has spent the majority of her adult life in Warralong, a community 120 km south-east of Port Hedland.

Chapman started painting with her mother, Maywokka May Chapman, and first exhibited with Martumili Artists in 2010. In recent years, having spent more time in Port Hedland she began painting at the Spinifex Hill Studios. As a deaf woman, painting is a crucial medium for communication and storytelling.