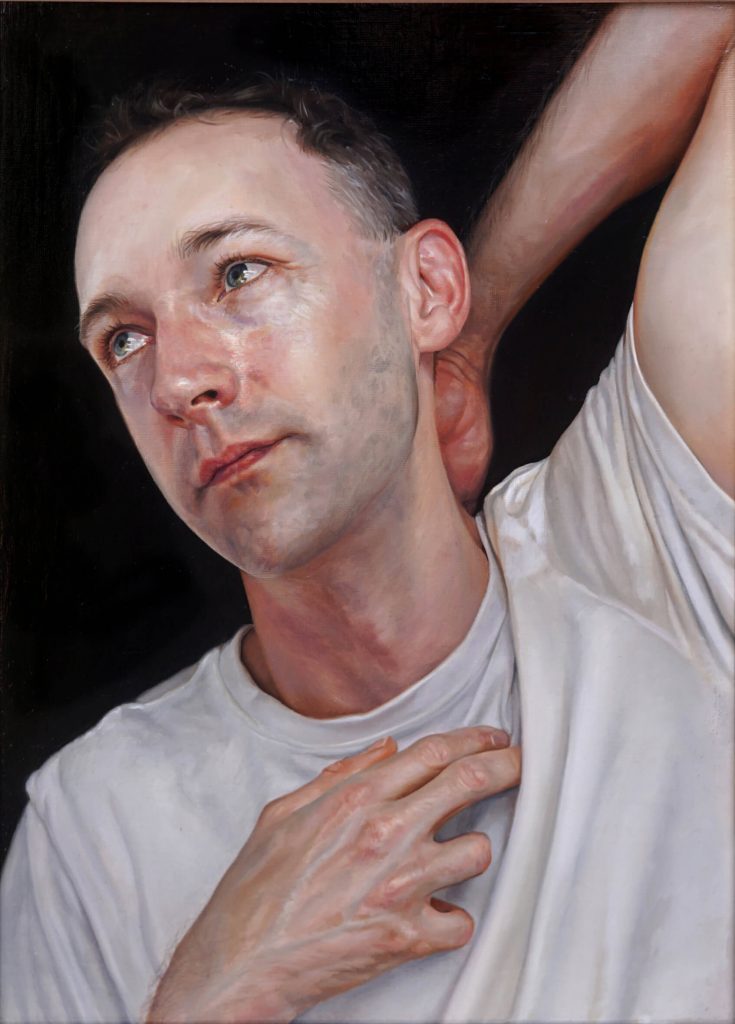 Artist Statement
Andrew is a dedicated artist, with strong technical skills and a relentless desire to see his artistic vision fulfilled. Having been a subject of Andrew’s work in the past, I have wanted to ‘return the favour’ for some time. Andrew’s primarily drawing-based practice often references classical art, in a manner both reverential and highly subversive. Being familiar with Andrew’s reverential yet subversive adoption of the forms and craftmanship of classical art, I sought to depict him in a similar fashion, posed as Michelangelo’s dying slave.

About the Subject
Andrew Nicholls is an acclaimed artist, writer, and curator whose practice engages with the sentimental, camp, and other historically-marginalised aesthetics, and traces the historical recurrence of particular aesthetic motifs. While primarily known for his intricate large-scale drawings, Nicholls’ practice also incorporates ceramics, photography, installation, performance, and filmmaking. His work is held in major collections including the Art Gallery of Western Australia, Perth. Nicholls was a previous finalist of The Lester Prize in 2019.

Daevid Anderson is a visual artist currently living and working in Perth. He is a five-time finalist in The Lester Prize, most recently in 2018.

Anderson has been a finalist in the Shirley Hannan Portrait Prize three times, picking up the Mailroom Prize in 2018. In 2017, he was selected as a finalist in five Australian art prizes, winning the painting prize at the City of Stirling Art Awards. His work is held in private collections across Australia and the US.

Medium: Oil on canvas board