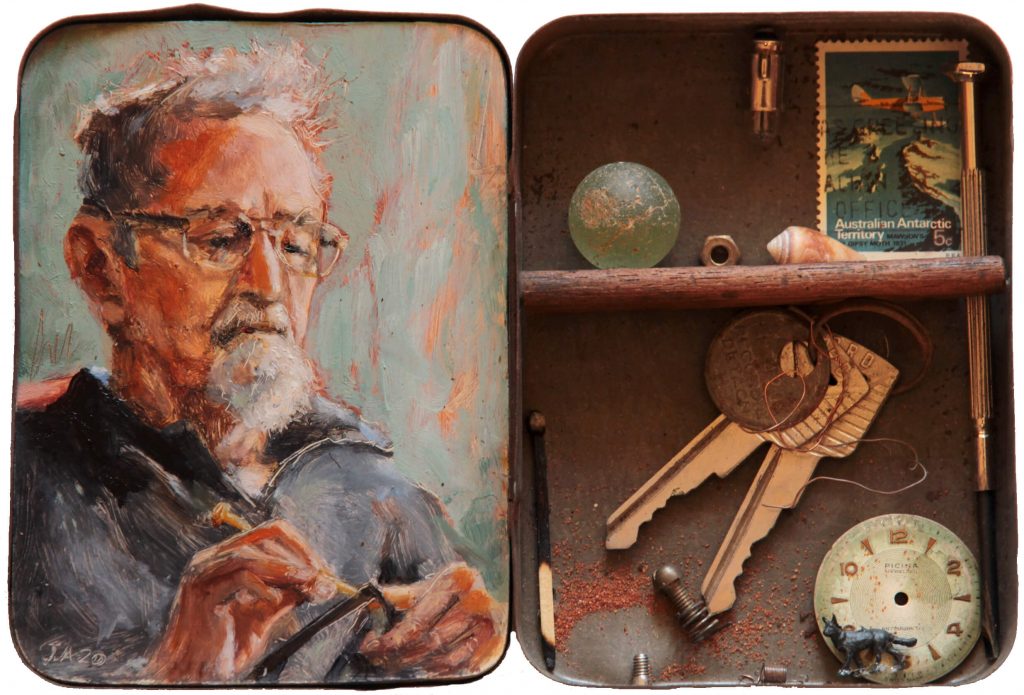 Jack of all trades

Artist Statement
For me, the act of painting Eric returned the warmth and joy of his presence to the intimate sites of my day-to-day life. It allowed me to reflect on a life that embraced challenges, upon a man who loved little more than an impossible problem to solve—large or small.

I chose to paint Eric enacting one of his most joyous and favourite pastimes—fixing something for someone. For me, painting onto board and scratching back into it, gave an effect that was evocative of his face. The portrait is assembled in an old tobacco tin, selected from the multitude that still crowd his shed—a space filled with objects whose future usefulness only he could imagine. Fragments selected for the portrait are tiny anchors to Eric’s maritime and terrestrial journeys. He ran out of time long before he ran out of parts and projects.

About the Subject
Eric Nidd was an intrepid individual whose life embraced so many places and occupations that he became a “Jack of all trades”—the consummate problem solver. At 15 years of age, he left home for the sea, ultimately sailing to all points of the globe including Antarctica. A man of innumerable jobs and callings, Eric was a diesel mechanic and electrician, an ambulance driver, an RAC break-down mechanic, a postman, a volunteer bushfire fighter, and occasional grumpy old man. If you were marooned on a remote country track with a bushfire looming, you hoped for Eric to rattle over the horizon in his antique Land Rover to save the day.

Further Insight
Jill Ansell is a Western Australian figurative artist who works across a range of subjects from surreal desert landscapes to portraits. Working predominantly in acrylic, oils and found objects, Ansell’s assemblages carefully weave portrait and object together to provide an intriguing glimpse into the intimate world of the subject.

Medium: Oil on board and assemblage