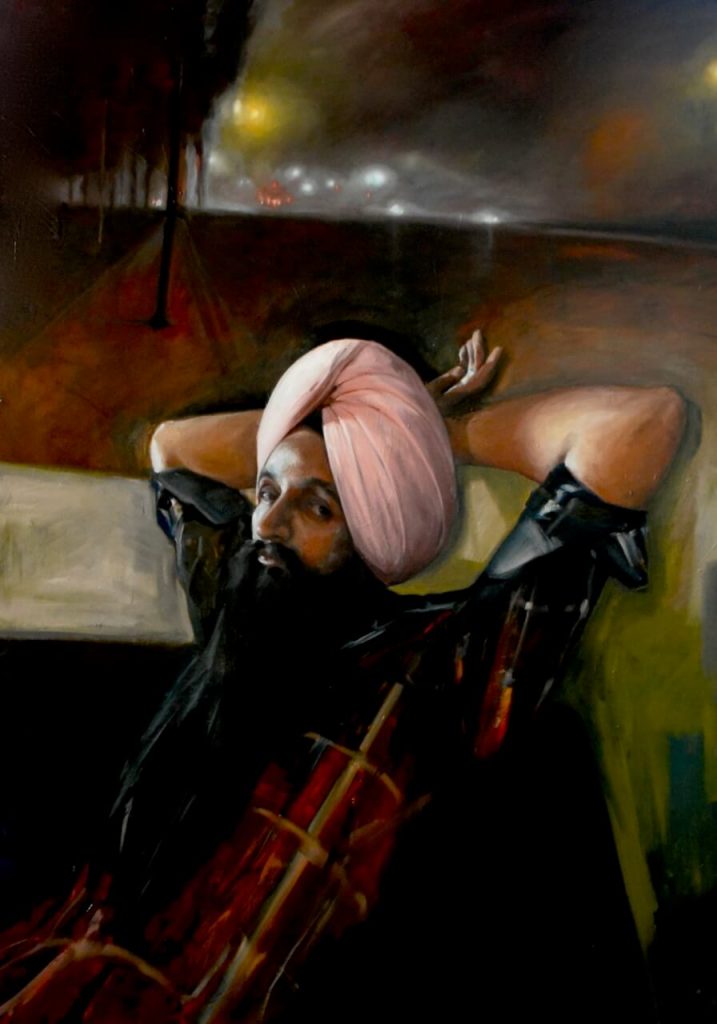 Artist Statement
Gurinderjit is a hard-working person. Spending his days at the mechanic’s workshop and his nights driving, Gurinderjit often picks up people who are down on their luck—feeding them or putting them up in a hostel overnight. Unlike him I am not a Sikh, but his principles really speak to me. They say: move through the world with empathy, do your own work, and share. The Sikh turban declares a safe place not just for Sikhs but for anyone who stands out as different. You cannot hide in a turban and Gurinderjit is often hassled because of it. However, the dignity with which he ties and wear his turban each day shows me how to be in the world with kindness and compassion.

About the Subject
Gurinderjit Singh was born in Nasrali, a village in Punjab state, India in 1987 and migrated to Australia in 2008. He currently works as both an automotive mechanic service manager and a taxi/Uber driver. Gurinderjit also manages the Adelaide branch of the charity Khalsa Aid on a volunteer basis. His charity work has brought him in contact with some of the poorest people in Adelaide. During the COVID-19 pandemic, his garage became a kitchen. Preparing and delivering over 250 free meals a day to international students and the unemployed. Gurinderjit and a team of volunteers distributed over 700 boxes of food during that time.

Further Insight
Daniel Connell is an Australian visual artist who uses portraiture as a mode of socially engaged practice—exploring notions of exchange, translocation and belonging. Born in Adelaide in 1970, Connell trained as an artist while being employed as both a Spanish teacher and a support worker in a facility for the homeless.

From 2007 to 2010, Connell lived in India and has since worked on socially engaged art projects for the OzAsia Festival, the Kochi Biennale Foundation, Multicultural Arts Victoria, SA Health and BUAP University Puebla Mexico, and was project lead for the Government of South Australia trade mission to India. He completed a PhD in Visual arts at the University of South Australia, Adelaide and lectures part-time at Adelaide Central School of Art. In 2018, he was invited to present his intercultural research as a TEDx Talk.